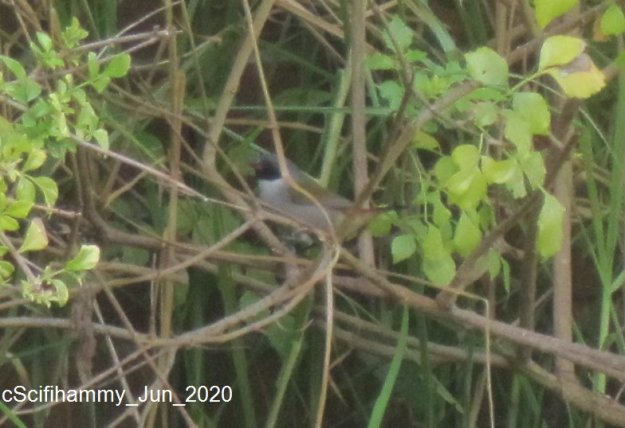 Spot a flash of red

Rustling in the bush

Every morning I do my heavy chores then reward myself with a cappuccino, sitting quietly outside in the garden, armed only with my trusty Canon camera.

I listen to the many different birds chirping and calling to each other in the surrounding trees. I can identify them by their particular song, so I knew the Sunbirds were back again, long before I caught a glimpse of one.

However, the other day as I sat there quietly sipping my coffee, enjoying the cool air, wispy streaks of clouds in a blue sky and the sun beginning to warm up the day, I saw a little bird fly to the honeysuckle and rustle around in the branches. It looked as though he was trying to gather some sticks or grasses for nest building.

Grabbing my camera I took a few shots. I could clearly see the branches moving, but could not get a clear view of the bird. It looked more like a little Mossie (Cape Sparrow) than a Sunbird, or perhaps a Cape White Eye.

Then a bird flew to the lavender and obligingly sat there for a moment, while I quickly took a photo. It’s amazing how light birds are, as this one was resting on the merest stalk of lavender.

This bird was similar to the one I’d just seen, but did not have the black head. Now I could see that the beak was short, thick and triangular; typical of finches. I had once spotted a Common Waxbill by my pool a long time ago, so wondered if it was this again.

Then the bird flew off to a solar lamp, where she paused for a second. I snapped an action shot as she took off again, and you can see her lovely red colouring.

Afterwards, on enlarging my photos of the tiny birds, I identified them from my book, Newman’s Birds of Southern Africa. They were a pair of male and female Swee Waxbills.  Click on the link for excellent photos. The male has the distinctive black face while the female is greyer, but both have the red back and triangular bill.

What a treat! I have never seen them anywhere before.

It just goes to show, that if you sit quietly and patiently, eventually you’ll spot a new (to you) species of bird, even in your own back garden.

post script: I apologise for the blurred photos. The birds were tiny and far away from me. It’s the best that my little camera and I could do!

And as I have discovered before, the best advice Google can give me for sharpening up a blurred image, is to take another photo – in focus!! 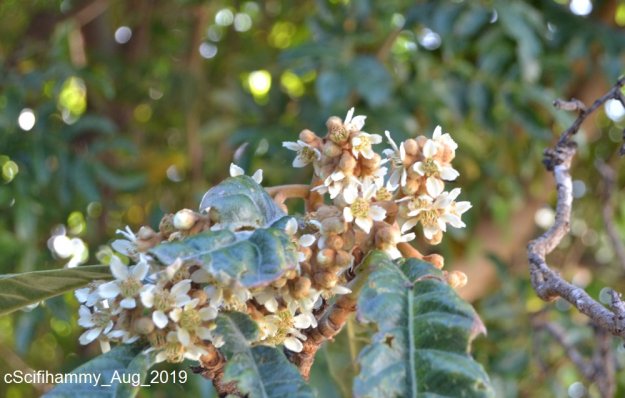 The funny looking loquat, Eriobotrya japonica, starts to blossom in April, just before our winter sets in.

My poor old tree is very old and has lost quite a few branches, yet still soldiers on.

Always the first to start growing, long before spring, the white flowers soon turn to tiny brown lumps and then to furry green balls.

Sparky the squirrel loves this fruit, when it is ripe and peach-coloured. He has a few weeks to wait yet.

I will see him most mornings running his little route across the tops of fences and along branches. 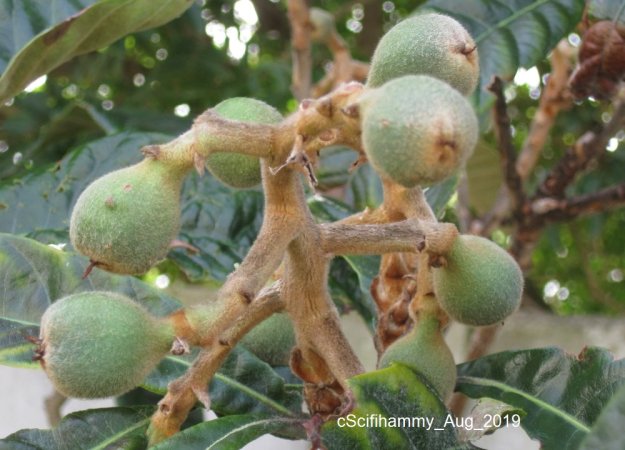 Selecting his chosen loquat, he then returns carrying it in his mouth and sits in a suitable spot to eat it. 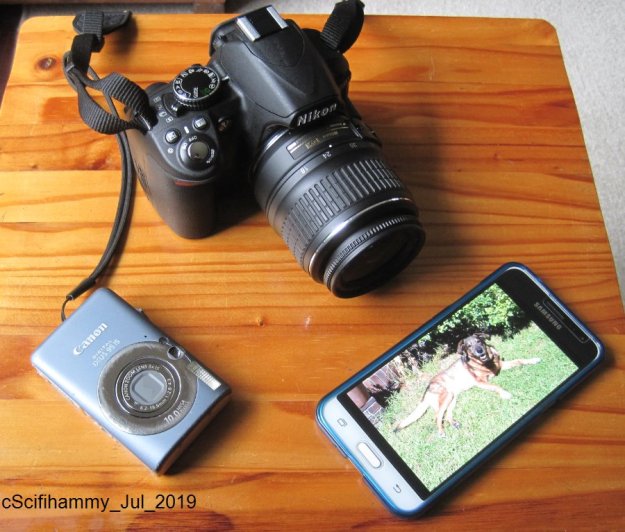 Some of you have wondered what cameras I use for my photos.

I have three, but mostly use my little point and click Canon.

With a resolution of 10 Megapixels and a 3.0 optical zoom lens.

Although it is quite old now, it is extremely forgiving and takes decent pictures no matter what I ask of it. You can see that the poor thing has been dropped a few times, resulting in the dents in the zoom.

It somehow manages to take a shot in focus even if the subject is moving, or more usually, I am moving! It automatically adjusts for light and speed.

And it fits nicely in my pocket!

I also have a better quality Nikon camera.

With a resolution of 14.2 Megapixels and a 3.0 optical zoom lens (the same zoom as the Canon.) 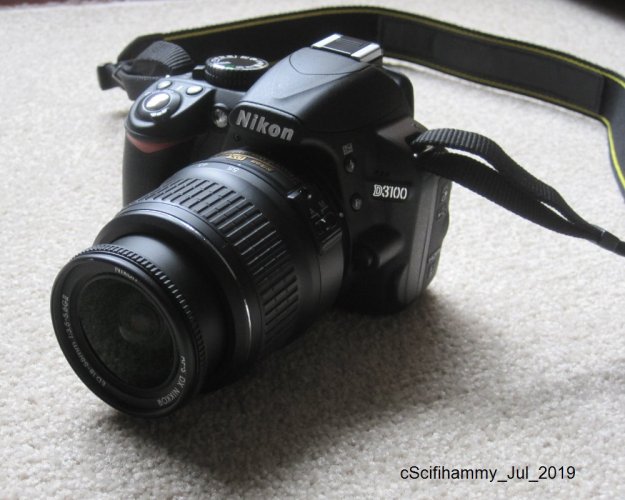 It takes much better photos, but even on Auto (which I mostly use!) is not very forgiving. I have to have a very steady hand, make sure I am not too close to the subject and that the subject does not move. 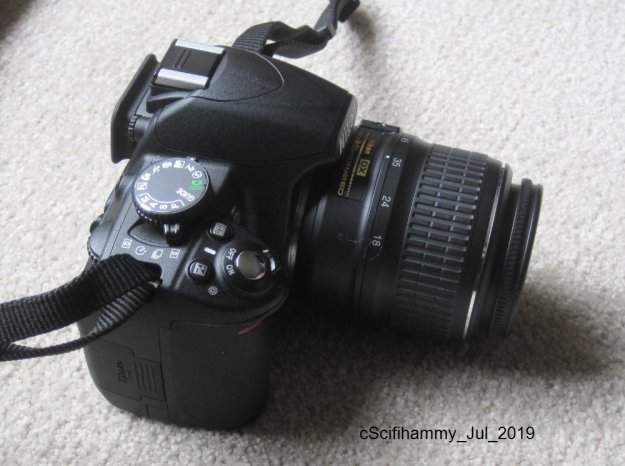 I’ve played around with the settings on semi-auto, to get better close ups with more bokeh. I select the aperture (f stop) and the Nikon selects the shutter speed (ISO).

Yes I can hear you laughing at me! Never mind, I have fun taking my photos.

You can see a selection of Nikon photos, from when I was learning to use the camera, in my Nikon-ography series.

Then there is my Samsung Galaxy Smartphone.

The camera has a resolution of 8 Megapixels. Zooming in does not improve the quality of the photo.

However, there is the Selfie option, with the added bonus of a “Beauty” setting. If you set this to the maximum, you won’t have any wrinkles at all! 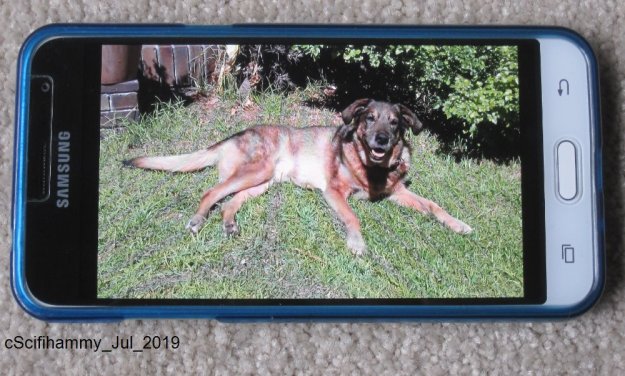 I really like the colour in these photos and the camera is also fairly forgiving.

But – and this is a very big but – you have to have a very steady hand! I have taken countless blurred photos because the technique I use with my Canon simply does not work with my Galaxy. You cannot point and click and walk away with a decent photo. You have to point, click and hold while the camera phone focuses, then either wait for it to finally take the shot, or click again.

So there you have it. Three ways I take my amazing (ahem!) photos. Each has its strengths and weaknesses and I choose the device according to the shot I’m trying to achieve.

Brighten up my day

It is lovely to see this splash of bright pink every time I go into the front garden. I planted this bougainvillea many years ago and it has grown into a massive tree. Blooming happily away now in the Cape winter, it really does brighten up my day. 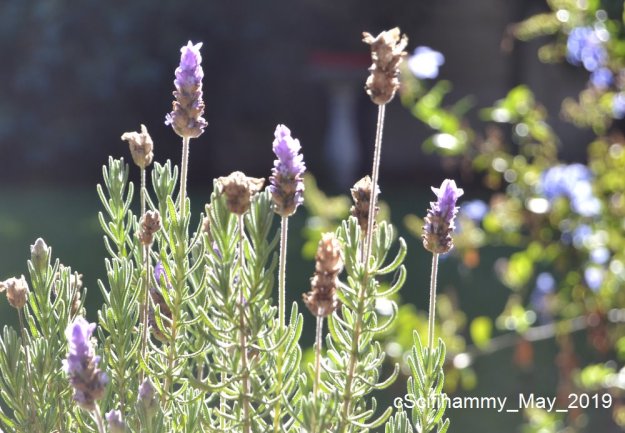 If your Monday’s blue

May a hint of lavender

Lighten up your mood

The new lavender bush I bought to replace the dead one is thriving nicely. 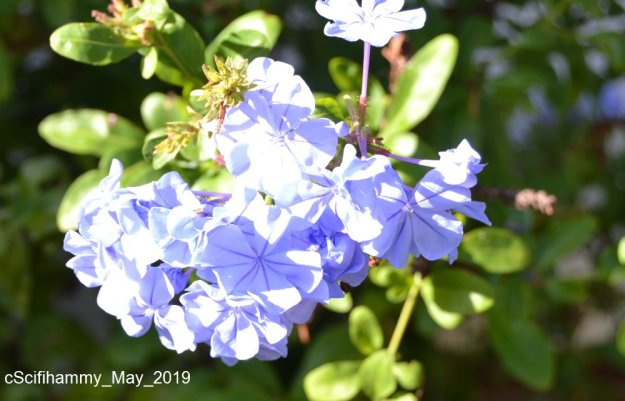 I took a walk round my garden the other day, taking photos of my plants with my Nikon camera.

With all the colourful flowers in bloom, you’d be forgiven for thinking it was Spring here in Cape Town. 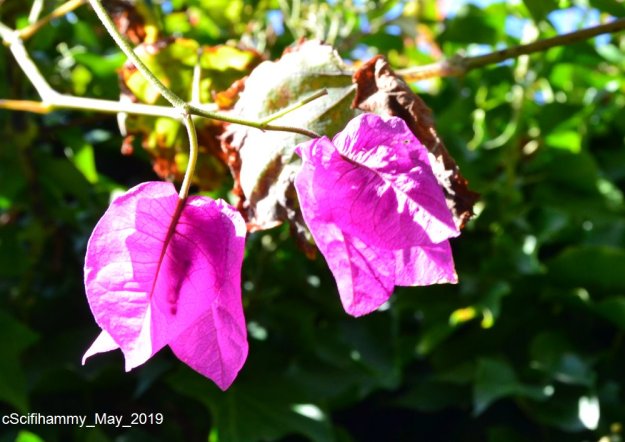 And while there is a chill to the air at night or early in the morning, mostly the sun still shines during the day and the weather is pleasant. 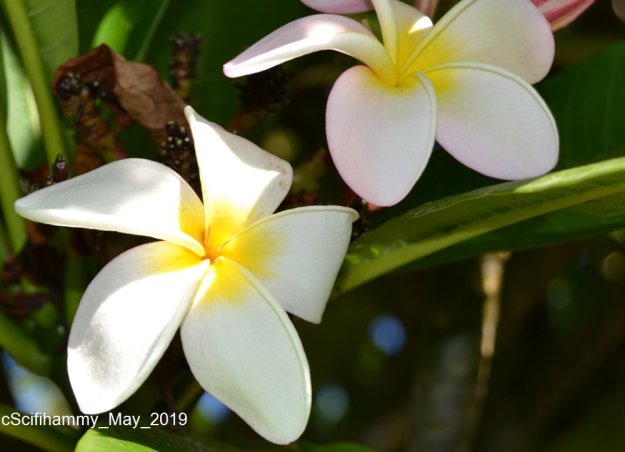 The roses are still blooming, as is pretty much everything else.

Apart from a few indications, such as the golden vine leaves: 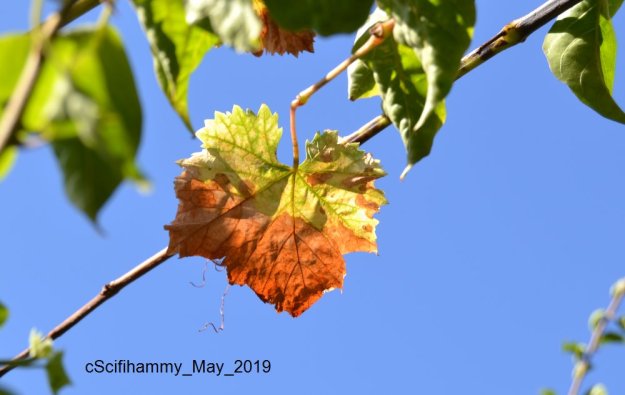 The only real way to tell the season – is to look at the date on the calendar!

The start of May; therefore it must be Autumn.

Soaking up the warm sunshine

These are the Honeysuckle bushes we planted several months ago to brighten up a new wall. 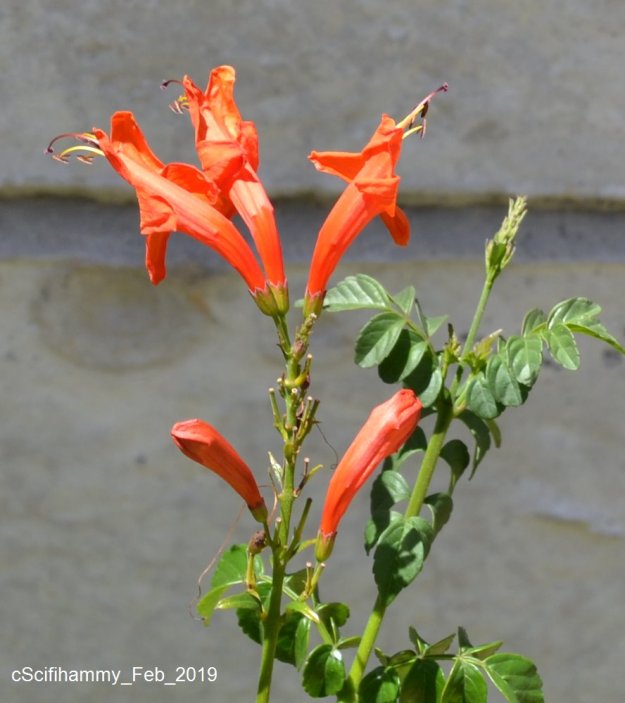 Producing flowers already, they are even ahead of the older bushes around the corner.

They range from yellow, gold and orange, to red at the end, though those flowers are not out yet.

They certainly brighten up my day, when I open the curtains in the morning to be greeted by their colourful smiles.

And the Sunbirds have found them again, adding a little more sunshine to the day. 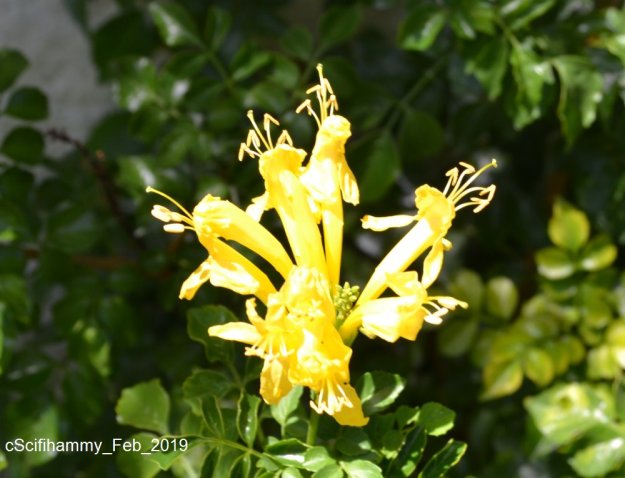 post script: Sunny photos as requested by Blosslyn, who is “In the “Bleak Mid-winter” – and for all of you in the North, who are fed up of winter.

My blue plumbago bush was very happy to receive a little rainfall in the middle of the dry season. *Manna from Heaven indeed.

post script: The expression *”Manna from Heaven” means you get something unexpected and good just when you need it. 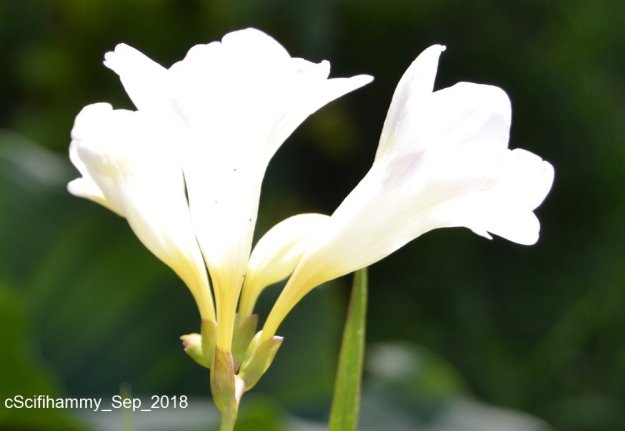 With varying shades of white

Unfortunately, after processing through WP, much of the clarity of the original photo has been lost! 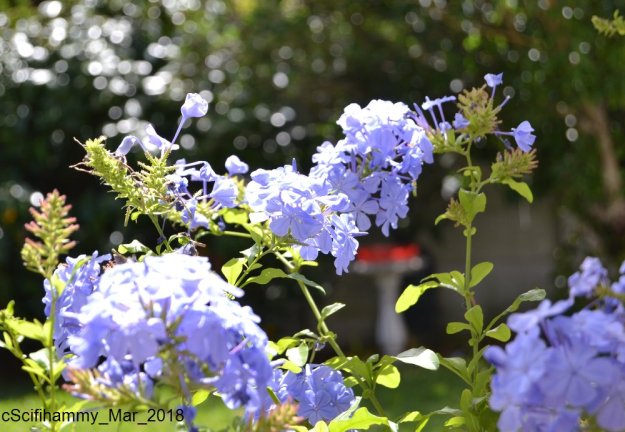 I was playing around with my Nikon camera and bokeh (the visual quality of the out-of-focus areas of a photo).

I find plants an easy subject matter, as they tend to remain mostly still and don’t run away!

Of course, the wind always gets up just as I am about to click, so the plants still dance around.

I love the circles of light in the distance. Any idea what those are?

OK I’ll put you out of your misery!

It’s sunlight reflecting off the waxy leaves of my Camellia bush.