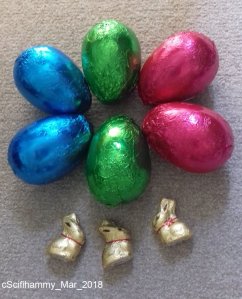 I’m all set for the weekend.

Also, I know many will say it’s a waste of money to buy chocolate eggs and prefer to buy a bar of chocolate. But I love the thin chocolate shell; it just tastes better. Maybe because chocolate here is a little different from that in the colder countries such as UK. It has to be, or else all the chocolate bars would be puddles on the supermarket shelves!

This quote seemed appropriate, as it’s Easter Sunday and I guess many are eating their chocolate Easter Eggs right now.

Also I wish those of you who celebrate it a Very Happy Easter. 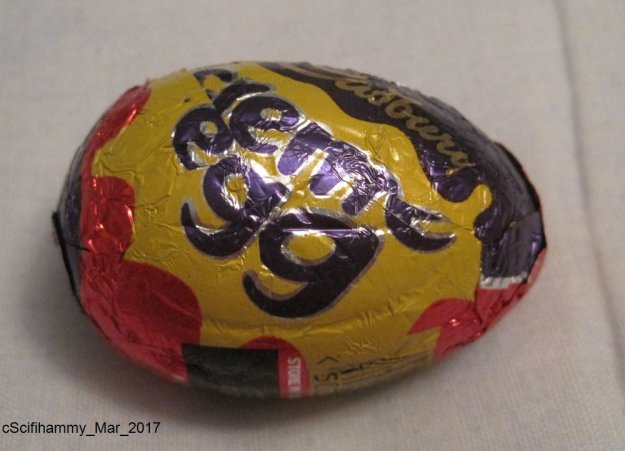 Cadbury creme eggs were always a favourite at Easter time and I ate more than my fair share of them growing up in the UK. Of course, they are much smaller now than they used to be and, in my opinion, not quite as yummy.

You used to be able to buy these here in SA, many years ago. Then they disappeared for decades. Amazingly, last week I found one small box of them just sitting there in a local store. I haven’t been back since, so have no idea if there are any left. And I only bought three!

However, my favourite cream eggs ever, I used to buy at a Transport Cafe, when I was a kid living in the north of England. They were half a chocolate egg with the most delicious white cream inside. They stopped making them while I was still a kid, which was such a pity, as they were affordable to us. But I still remember them fondly.

Do you have a favourite chocolate egg?

Chocolate comes from cocoa, which is a tree. That makes it a plant. Therefore chocolate is a salad.

I always knew there was a good reason I eat chocolate. Got to get my greens! 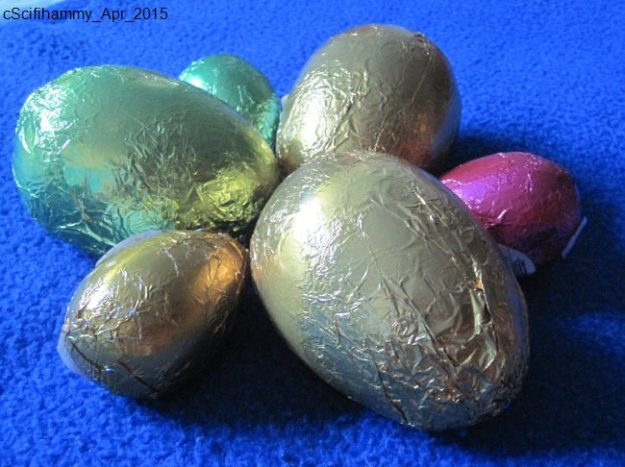 Everybody knows that chocolate is bad for dogs. Everybody except the dogs, that is.

One morning, I left the house early, quickly grabbing a protein bar from the cupboard. Unfortunately, I forgot to shut the cupboard door properly. When I came back a few hours later, I found my two dogs of that time, Little  Monkey and TJ, happily lying on their beds in the kitchen – surrounded by chocolate wrappers! If it had not been for the evidence, I would not have suspected anything; they wore such innocent expressions. They had cleaned out my entire chocolate supply! (which was substantial – I am a woman after all.)

They had each eaten large amounts of “toxic” chocolate. One had even consumed the whole of a 200g Cadbury’s bar. Luckily, neither of them had any adverse reactions. Maybe it is because they were mutts?

Before I adopted Little Monkey, I was not used to dogs that could reach  the top of the kitchen counters. Though she was the same sort of height as my other dogs, she has a very long body, so when standing on her hind legs could easily reach the countertop. The first I knew of this was when I entered the kitchen one night to finish off the pizzas and pop them in the oven, only to find her standing up at the counter, chewing her way round the edge of a frozen pizza base! She had eaten an inch or so from round the edge, just as far as she could reach. It was so funny to see her doing this that it was hard to be stern with her.

Little Monkey has continued to help me with my diet over the years. One Christmas I had left a bag of shopping on the floor momentarily. Out of it she stole a set of Lindt mini chocolates; Santa and four reindeer. Lindt! I had stood in the shop um-ing and ah-ing for ages before deciding to buy them as a treat to put on the table with the crackers.

Maintaining the festive spirit, she once helped herself to six mince pies, even eating some of the foil bases. How she reached them when they were pushed way back on the counter, I do not know. Ditto a bought Christmas cake, that had sat on the counter for over a week, untouched. By the time I came in the kitchen, she had consumed the whole cake, leaving the cellophane wrapper. She still expected her supper that night, despite depositing the digested cake all over the garden for the next few days!