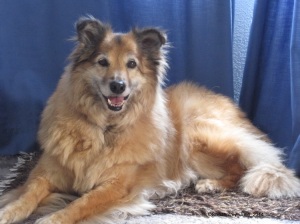 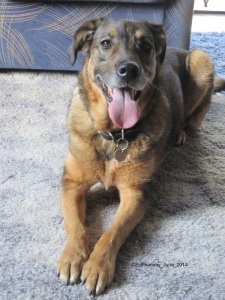 I used to have three dogs; Madam, TJ and Little Monkey. The old male, TJ, kept the peace between the two rival females; Madam, the Alpha female of the pack, and LM the runt of the litter and definite Omega. Whenever I took them in the car, I put Madam in first, and scooted her bum along the seat right to the door; lifted in TJ (gammy legs, unable to jump) then let LM bound in, tongue lolling, “Isn’t this great fun, Mum?” trying to stop her (unsuccessfully) from leaping all over TJ. Then off we drove, TJ lying down resignedly in the middle, Madam looking out of the window and studiously ignoring LM, and LM all hyper-excited and happy.

Most of the time the three if them lived happily together as a pack, but now and again, there would be a flare up, usually between the two females. You can read about the other fight here Fight!

In later years, when this incident happened, there was a lot of tussling going on for dominance between the now old and somewhat frail Madam, and the strong, in her prime LM.

One day, I came home after being out for a while and opened the back door to let the dogs in. TJ was lying on the stoep and Madam and LM were down in the garden by the Eugenia tree. It looked like there was something on the ground between them. I didn’t say anything, but I think the fact that I was now there triggered this fight, because next second Madam and LM were really going at each other; with lots of snapping and growling.

Often, if you can distract the dogs for a second they will break off. So I threw my car keys at them, luckily still in my hand. The keys shot through the fighting dogs, hit the wall and ended up under the mini hedge, making not the slightest difference.

So this was going to be more hands on! I wasn’t afraid of being intentionally bitten by the girls, even though the fight sounded so bad. As long as I kept my hands away from their heads I’d be all right. Madam was much more likely to bite me than LM, so I grabbed hold of LM’s tail and started pulling her away from Madam. I held tight and moved backwards, dragging LM with me; all the while the two girls were going at it. LM had now got Madam by the ear with her little front teeth, so Madam was coming with us, with her head on one side!

I pulled LM, with Madam in tow, all the way across the lawn to the apple tree fifteen metres away. Eventually, when I was wondering just what else I could do, LM let go and turned round to look at me, as if to say, “What are you doing, Mum? I’m trying to have a fight here!”

Madam, suddenly released, stood still for a moment, and I thought, “Great, she’s free. Now she can go in the house” only to watch in amazement as Madam threw herself back into the fight with gusto. This old dog wasn’t going to give up the reins just yet!

Finally, I pulled LM off again, shooed her behind me, and marched Madam into the house, where TJ was keeping out of it all, and shut the door. Breathe!

This wasn’t full blown aggression between the dogs; rather trying to find out who was the more dominant and leader of the pack. Madam was much more an Alpha dog than LM, who is way down the pecking order at the Omega end!

I quickly checked over LM. Some damp gobby bits of fur, but no blood. I went inside and checked out Madam. She was also gobby, but although she had no major damage, her ear was bleeding from being dragged across the garden by LM’s teeth. As she was very old, I decided to take her to the vets for a check up, just to be sure.

So I went in the garden to retrieve my keys from under the hedge. The car ignition key had broken open into two halves after hitting the wall, so I just snapped it back together again. I shut up the house, leaving TJ and LM behind, and went out to the garage with Madam.

I settled Madam in the back of the car and started the ignition. Click! Nothing. Oh for Pete’s sake! What a time for the battery to be flat, or whatever else it was. I tried again, but there was no way this car was starting.

Back to the drawing board; or rather, phoning my friend to take me and Madam to the vets. I sat outside and waited with Madam, and a bottle of wine for my trusty friend. A quick check at the vets revealed only superficial damage, but the vet cleaned Madam up and gave her an antibiotic shot and painkiller. I’m always more careful of old dogs, and had been worried about the after effects of shock on Madam.

The next day I tried starting my car again; no joy. Then I had the bright idea of trying my spare set of keys. The car started first time! So I phoned up the car manufacturers and asked them about the key, and the cost of a new one. They said there was a tiny chip inside the key, that was probably damaged, and depending on the type of key would cost anything from a few hundred Rand to a thousand or more to replace! Hmmm.

I opened up the faulty key again, and compared it to the working key. There was a tiny tiny chip missing! It was about 2mm by 3mm in size; and black with a little white V on it. This was going to be hard to find!

I went outside to where I had picked up the key under the hedge, 24 hours before. It had rained over night, was still drizzling, and under the hedge it was full of dead leaves and dirt. I scrabbled around with my hands, wondering how I was going to see something so tiny and dark as this chip! Well, I went through sections at a time systematically, gathering damp earth and filtering through it. And I found the chip!!

I wiped it off, fit it back in my key, and the car started again!

But what had the dogs been fighting over in the first place? I went to investigate after the vets. You won’t believe this, but it was pooh!

They were fighting over who got to eat the dog pooh! This certainly was a dominance issue, but really girls?

– Both dogs choose to dig themselves a hollow and lie outside under the shade of the trees. This is unusual because Mr Spaghetti Legs always prefers to be inside.

Dogs will scrape away the surface of the hot ground (soil/pristine lawn, they care not which) to reach the cooler soil underneath. They then stretch out in their hollow and sleep away the sweltering day.

The past master at this was my old dog Madam. Every day she went to her sleeping hollow and scraped away the top layer of hot soil. After a while, the shallow hollow became a deep pit. Still she continued to scoop out the top layer and then fall into her pit.

She would lie down there, with her front legs up at right angles and her little paws grasping the edge of the pit.

Scifi: Surely you can’t be comfortable like that, Madam? 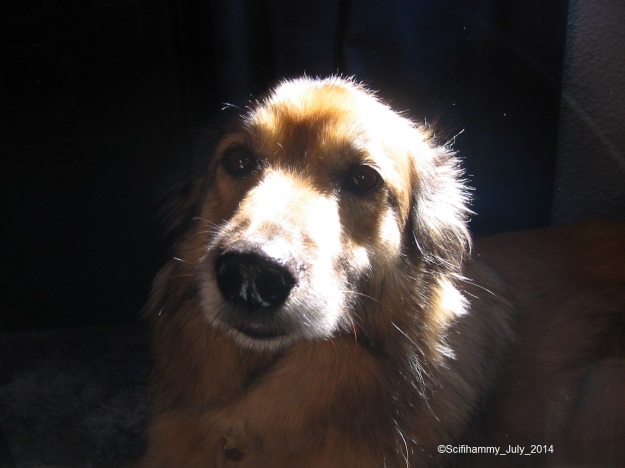 Madam – the Border Collie cross – with her Spaniel impression

A picture paints a thousand words.

Lady and Jack Play-Fight *These are trained stunt dogs – do not try this at home!

It was 5.30 on a pleasant Spring evening, with the sun mellow rather than blistering. I sat out on the stoep with my glass of ice cold white wine and breathed a sigh of contentment. Just a short interlude before starting the evening meal.

Little Monkey was running round the garden with various toys, shouting, “Look at me Mum!” while the old dogs were up on the stoep with me. Madam the old girl came up for attention, so I gave her a quick pat on the head and she went away. Then TJ came up, and he got the same brief pat. Next second Madam has launched herself at TJ!

I jumped up and took my wine safely inside; not too bothered about the dogs. Maybe twice a year there was a little tiff and a reasserting of pack order. It was never aggressive or vicious, and never any injuries. Little monkey had now joined in, surprisingly on the side of Madam. Usually the two females squared off with a “There can be only one!” attitude and Little Monkey and TJ were best friends.

But this is all instinct. Attack the wounded, the weak, the sick, the old, the different. When it was TJ who had the underhand, the two girls joined forces.

Then Madam tripped over the chair and was down. Instantly the two other dogs laid into her. And though there was a lot of noise and teeth, it still wasn’t a serious fight. We’re talking seconds here.

But enough is enough, and I stepped in to separate them all.

Since Madam seemed to have come out the worst from the engagement, I shut the others outside and checked her over. Though there was no blood, unfortunately she had a six centimetre gash in the ruff of her neck. An unlucky accident; maybe Little Monkey got her fang caught in the collar when going for the thick neck mane.

I looked at the clock. Quarter to six. The vets shut at six. I downed the rest of my wine in one and rushed Madam to the vets for stitches, pain killers and antibiotics. Although she felt pretty sorry for herself, she was all right, and all the dogs were fine with each other again. Never a dull moment with three dogs.

So much for the interlude!

post script: I don’t have any photos of my dogs fighting. Not surprisingly, I rush to grab the dogs, not the camera. This photo is the best I have – great friends mock-fighting. 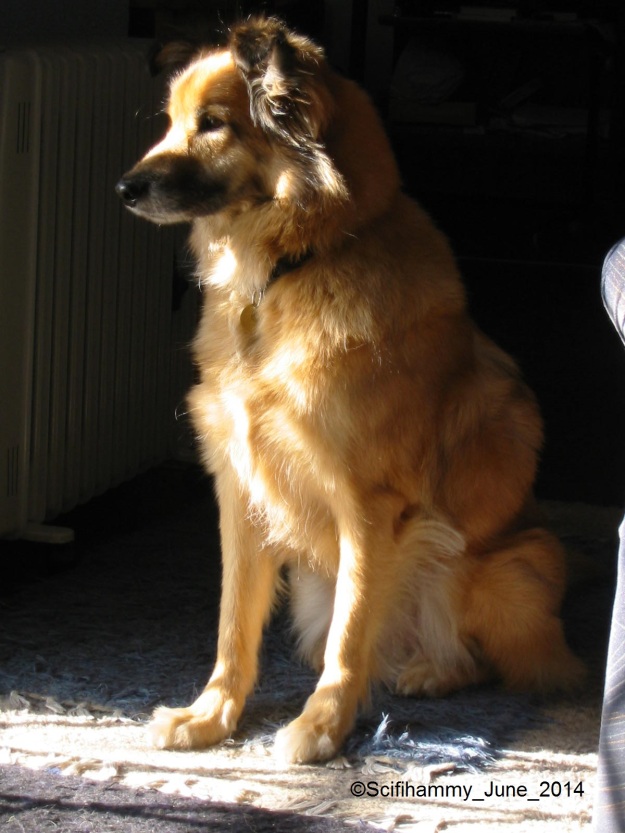 Madam; Miss Independent; the most stunningly beautiful of all our dogs; the one everyone automatically went to stroke; and the one most likely to bite you! (Granted – the one time she did bite me, I had accidentally shut her tail in the door – so fair enough!)

She was about 7 years old when we adopted her from a rescue organisation. She had fur that constantly grew along her ears, legs, tail and undercarriage, with “bantam chick” fluffy feet. The fastest of our dogs; she could even catch the much younger Little Monkey. She was independent from the first, and quite happy, in later years, to spend the day on her own, snug on her bed in a little niche, round the back of the house; appearing for walks and meal times.

From her I learnt that even a pack animal like a dog may prefer to be alone.