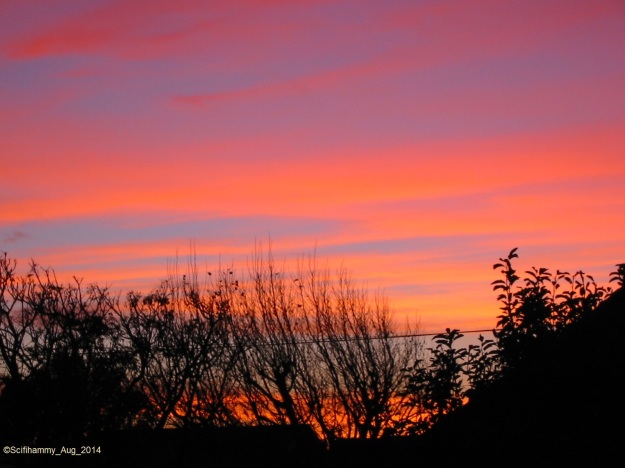 Here is a gratuitous photo of a lovely red sunrise, in lieu of a decent picture of the recent Blood Moon.

We had crystal clear skies last Friday night here in Cape Town and a perfect view of the whole eclipse and subsequent Blood Moon.

I did take a few photos, but my little Canon camera wasn’t quite up to the task.

What do you mean, you can’t see anything? 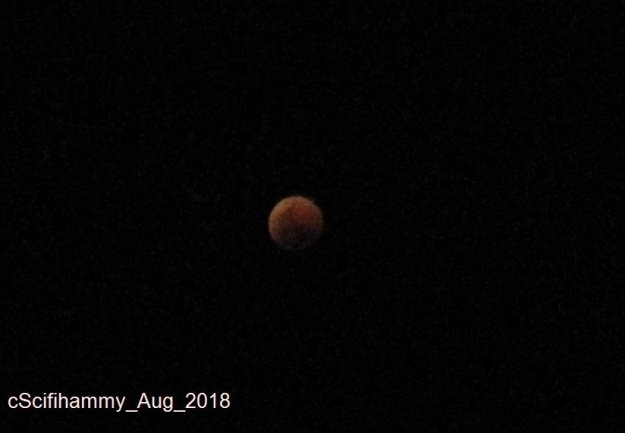 Above is the Blood Moon and below is Mars. 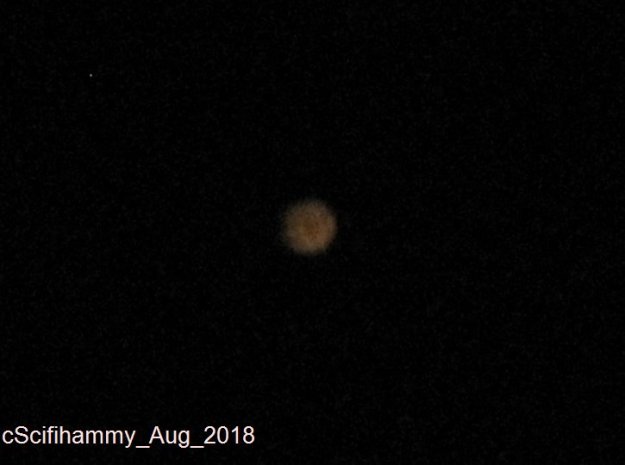 Though people the world over were witnessing the same event, here in Cape Town we saw the Earth’s shadow creeping across the moon from the opposite direction to those of you in the north.

And when you think just how far away the Moon and Mars are, I think it is amazing that my little old Canon managed to capture anything at all!

post script: This is just a fun post. There will be many excellent captures of the eclipse out there online for those who are interested in actually seeing what went on! 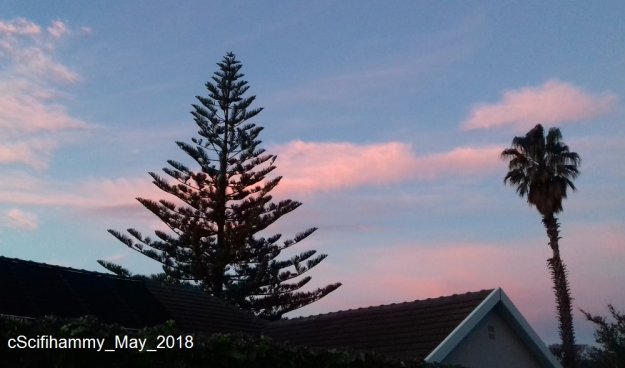 Put there for my delight, or

I know it isn’t much of a pink sky, but I don’t often see coloured sunrises, more usually sunsets.

You need clouds for a start; which we see a little more of now we’re almost in the rainy season.

And you have to be very quick!

I opened the back door early one morning to call in Little Monkey (she still insists on sleeping outside in her cosy nook) and noticed the gorgeous sky at once.

By the time I had dashed for my camera and taken a few shots, the pink was already fading fast. In another minute it had gone completely.

Some mornings, while it’s still dark, I hear the Cape Eagle Owl. Magic.

post script: The poem I learnt as a kid is as follows:

There are other variations on the old weather forecasting poem. 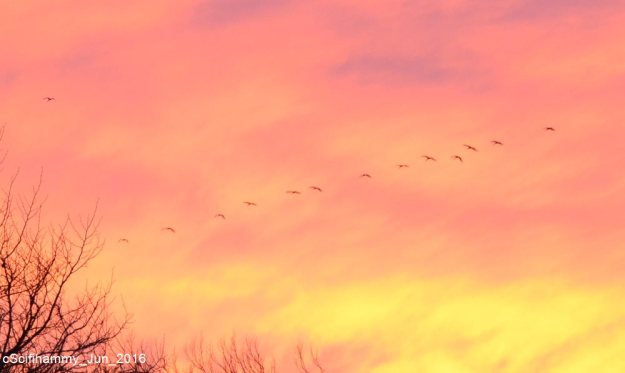 When I got up this morning, I noticed the sun rising over the neighbour’s house and the sky was a lovely orangey/peach colour.

I just enjoyed it for a moment then got on with my first chore of the day; cleaning dog poop off the floor.

When I let the dogs out into the back garden, the sky was suddenly ablaze with the most glorious deep reds and pinks and oranges.

I dashed back inside and grabbed both my cameras. After all, I won’t improve with my Nikon if I don’t use it.

I quickly took several shots with my Canon, so at least I knew I would have some photos of this beautiful, coloured sky. Then I tried with my Nikon. I just set it to Auto, because I have found in the past that it is a bit iffy with skies, or (and this is most likely), I have no clue what I’m doing!

I took one, Great. I took another and the flash popped up. Are you kidding me?

Well I faffed around and got some reasonable photos, when I heard geese flying overhead. They were approaching me from behind and flying into the sunrise. Perfect!

I could see them clearly with my eyes, silhouetted against these gorgeous colours, but to try to capture them with my camera?

Unfortunately, I had switched my Canon off and even the few seconds it would take to switch on again would be too long and I’d miss this marvellous spectacle. 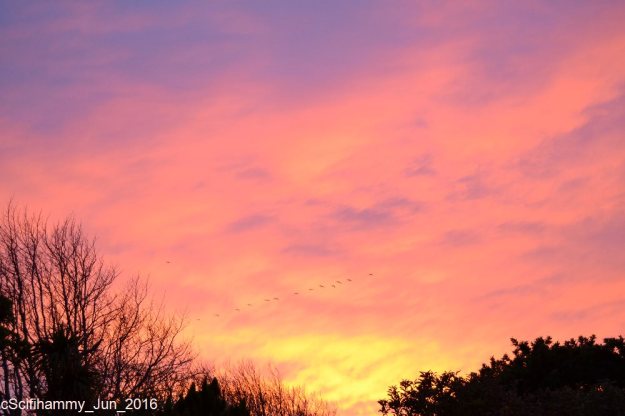 There was nothing for it. I aimed with my Nikon and tried to keep a steady hand, as I watched the geese rapidly disappearing into the dawn. I got one click. This is it. But it seems to be in focus and you can tell the specks are birds.

Moments later and the whole sky was heading back to its usual morning blues. It is Monday after all!

Sunrise and Sunset are so fast here, you have to be quick, but it was worth it to stand out there in the freezing air, in my pjs, with no scarf protecting my neck, (I’d taken it off to de-poop the kitchen floor). I got this.

post script: A flock of geese in flight are called a skein; when they fly in a V formation they’re referred to as a wedge; and when they’re not flying, a gaggle.

Untouched Sunrise in the Western Cape

If you stood on Mars and looked up, the Martian sky might look something like this: without the skyline of course!

Mars has a thin atmosphere, made up mostly of carbon dioxide. There are also lots of iron oxide dust particles, all of which contribute to the sky appearing a bright orange/red during the day.

So, Is there life on Mars?

I’d like to think that, if not now, then once upon a time, long, long ago, maybe something lived there.

After all, we are still finding new life, albeit microbes, surviving as extremophiles, in the most inhospitable places, here on Earth.

These life forms can be found:

– deep under the sea in the Mariana Trench

– in lakes of sulphuric acid

– in lava vents of volcanoes

– in Antarctica, half a mile under the ice, in the dark and extreme cold

You can read more about extremophiles here:  one two three four

So yeah, maybe there is life on Mars. But would we recognise it when we saw it?

For the definitive answer to the question, “Is there life on Mars?” let us ask David Bowie.

post script: The Mars theme might seem topical, after the movie and the book, ‘The Martian’ by Andrew Weir, (which I read in December, in 2 days; it was that good!) but I started a draft of this post way back in June 2014!

Why has it taken me so long to finish the post? Well, I like to get all my facts straight and it takes time to find appropriate links. Mostly, I keep my posts short, so they don’t take so long.

Why do I bother, you ask, since hardly anyone ever clicks on the links?

I do it for myself. I like my posts to be the best they can be. I want the facts there at a click, for when I read this again sometime. And you never know, someone else might have the interest and time to read them too.

Lights up the sky with its own fire.

One aftermath of the fires last week (see Forty Degrees) is this startling fluorescent sunrise. The photo is untouched, but sadly does not reflect the light that shines in the actual photo. If you humour me here – tilt your screen slightly away from you, and the yellow should light up a little more!